Butler is working on her master’s degree in animal breeding and genetics at Kansas State University. Her essay was titled “Review of Genetic Studies of Bull Fertility.”

Each year, winning essays are selected and published in the annual BIF Research Symposium and Annual Meeting Proceedings. Each winning author will receive a $1,000 scholarship.

Baker is widely recognized as the “Founding Father” of the BIF. He played a key leadership role in helping establish BIF in 1968 while he was chairman of the Department of Animal Science at the University of Nebraska–Lincoln.

Cundiff retired after 40 years as a research geneticist with the U.S. Department of Agriculture, Agricultural Research Service. He was research leader of the genetics and breeding research unit at the U.S. Meat Animal Research Center from 1976 until 2005. Cundiff has not only designed, conducted and published some of the most important beef breeding research of the 20th century, but has also led in the transfer of new technology to the beef industry through his continued work in BIF and his presentations made across the nation and around the world. 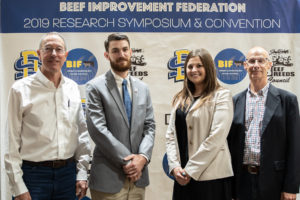 The Beef Improvement Federation (BIF) presented Roy A. Wallace Memorial Scholarships to Benjamin Crites and Taylor Nikkel June 19 during the group’s annual meeting and symposium in Brookings, South Dakota. These scholarships were established to encourage young men and women interested in beef improvement to pursue those interests as Wallace did, with dedication and passion.

The graduate student award was presented to Benjamin Crites, Lexington, Kentucky. He completed his master’s degree and doctorate at the University of Kentucky (UK) in reproductive physiology. Crites’ master’s project focused on incorporating gender-sorted semen into fixed-time artificial insemination protocols for beef heifers and cows. Currently, Crites is continuing his education at UK with Dr. Bridges, working on a doctoral degree in reproductive physiology. Their lab is evaluating the selenium form regulation on fertility in beef cattle.

During Crites’ graduate studies, he also served as a beef extension associate at UK. Along with networking with producers, extension agents and extension specialists daily, this position allowed Crites to become involved in the UK Integrated Reproductive Management Farm program, an extension project that assesses the impact of stimulating long-term behavioral changes in management practices that are designed to increase reproductive performance.

“The experiences I have acquired in extension and research activities thus far at UK have provided an outlook for my future endeavor,” Crites says. “Regardless of where I may end up, I would like to combine my passion for cattle reproduction and genetic improvement with the opportunity to assist producers in hopes to increase their overall efficiency, productivity and profitability.”

After graduating from UK, Crites plans to pursue a career in academia as an extension specialist or in the industry as a professional embryologist.

Taylor Nikkel, Maple Hill, Kansas, is this year’s undergraduate winner. She will graduate from Kansas State University (K-State) in May 2020 with a degree in agricultural economics.

During her time at K-State, Nikkel has taken opportunities to learn more about agricultural policy and law. In the fall of 2018, she attended the Agriculture Future of America (AFA) leadership conference, which helped her connect with peers who had similar interests in pursuing a career path of agricultural policy.

This past semester, Nikkel interned with the U.S. Senate Committee on Agriculture, Nutrition and Forestry.

“The opportunity was the next step to further exploring the agricultural policy world,” Nikkel says. “I am so grateful to learn from our nation’s policy makers.”

This summer, Nikkel accepted an opportunity to work with Farm Credit Mid-America as a government and legislative affairs intern. Upon completion of her undergrad degree, she plans to pursue a law degree that will allow her to better analyze and understand legislation that affects the industry.

“My career plan is to stay in the industry and to utilize my knowledge and experience to serve and lobby for America’s farmers and ranchers,” Nikkel says. “I hope that by continuing to learn and make connections, I will one day be able to help convey their needs and wants to our nation’s lawmakers.”

The Roy A. Wallace Beef Improvement Federation (BIF) Memorial Fund was established by Select Sires to honor the life and career of Roy Wallace. Wallace, who worked for Select Sires for 40 years, served as vice president of beef programs and devoted his life to the improvement of beef cattle. He became involved with BIF in its infancy and was the only person to attend all of the first 40 BIF conventions. He loved what BIF stands for — bringing together purebred and commercial cattle breeders, academia and breed associations, all committed to improving beef cattle.

Wallace was honored with both the BIF Pioneer Award and BIF Continuing Service Award, and he co-authored the BIF 25-year history, Ideas into Action. Two $1,250 scholarships are awarded each year, one to an undergraduate and the other to a graduate student. Criteria for selection include a demonstrated commitment and service to the beef cattle industry and a passion for the areas of beef breeding, genetics and reproduction, academic performance, and personal character.