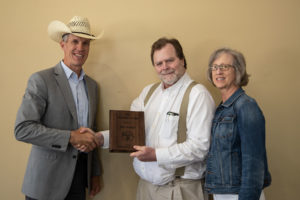 “Hough was the long-time executive at Red Angus, as well as executive at Limousin. He has also worked in production agriculture and academia where he received early promotion and tenure,” says David Nichols of Nichols Farms, Bridgewater, Iowa. “Red Angus went from the 11th to the 4th largest breed during his tenure.”

Hough served on the BIF Board, served as a Guidelines chapter editor, multi-times Guidelines author, standing committee chair, and has been a general session speaker at the annual symposium. In addition, he was the cofounder and first chair of the Ultrasound Guidelines Committee, as well as president of the Beef Breeds Council, and director of the National Pedigree Livestock Association and Genetic Evaluation Council. Additionally, Hough has received the BIF Continuing Service and Ambassador Awards, and with receipt of the BIF Pioneer Award he joins Dr. Bob de Baca as the only people to be recognized with all three awards.